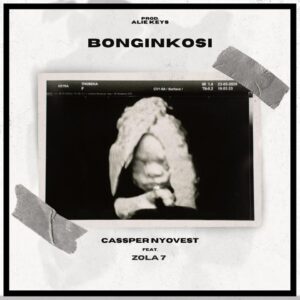 “Cassper Nyovest Bonginkosi Mp3 Download” is an hip hop song recording by popular South African musician, rapper and songwriter Cassper Nyovest. The joint was released as a single on the 21st of August 2020. The song also features South African hip hop veteran Zola 7 who the track seem to have been named after. The vocals came from the two talented artists who can be said to be veterans together. It has been picked as the Hip Hop tack of the week by AfroHits Magazine.

Many fans have been expecting a new project from Cassper Nyovest since he dropped a single earlier this year which has gone to become a hit amongst his fan base. Well, about an hour ago he tweeted talking about how this particular track will be dropping tomorrow and how he is excited about the single he has with legendary Zola 7. He also talked about his forthcoming album being the cream of the crop and all. Well, we have received the song and if i should review i would say the song is a hit already with that hard Bonginkosi lyrics and versatility you will all like it.