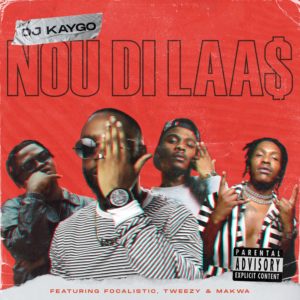 “Nou Di Laas” is a hip hop song recording by talented South African musician, rapper and disc jockey DJ Kaygo. The track was released on the 5th of June, 2020. The rapper featured a couple other brilliant rappers like himself, Focalistic, Tweezy and Makwa all appeared on the song.

This single came in long after 2018 which was when the popular Disc Jockey disappeared and now he has appeared again like a ghost and he didn’t just appear he showed up with a whole new hip hop record and as usual he gathers fellow musicians from the South African music scene top jump on the rap/trap vibe type of song.

Many hip hop music critics in the industry may think it is a little too regular and sounds like the usual everyday SA Hip Hop songs that are being released to the listeners. Enough of the story the best thing is for you to listen to the song, melodies and lyrics yourself and judge.