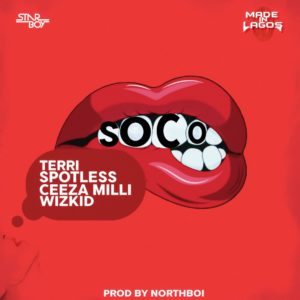 “Soco” is an Afrobeats record by famous Nigerian musician, songwriter and singer Wizkid. The song was released as a single on 20th of February 2020. The song features vocals from Wizkid himself and other artists signed to his record label the likes of Ceeza Milli, Spotless and Terri. The song is among the top three biggest records of the singer’s career.

The creation process of the song was simple and quick. It all started when Wizkid received a beat from fast-rising producer Northboi in 2017 and like the Starboy wizkid says he always does, he freestyled on the beat and before he knows it he ha the hook complete in a matter of minutes. Soco was released under the pretence of his record label in  Nigeria Starboy by naming his label the original owner of the song he got himself free from the contract binding him form releasing any form of new music as he was still signed under the Sony record label at the time.

After having huge and very successful 2017 releasing his “Sounds From The Other Side” album, he stepped into 2018 guns blazing with several hits of his still buzzing in the new year, in February he finally decided to release the soon to be an immediate commercial success featuring rising artists he has signed to his label earlier that year and the year before. The song’s hook was written an created by Wizkid himself but all the verses were done by Ceeza Milli, Terri and Spotless with vocals sounding so much like Wizkid himself most of the fans did not know Wizkid was not on most of the verses vocals until the music video was released showing him only singing the song’s chorus while the other artists did the verses.

Wizkid Soco became an instant Afrobeats hit after release with several celebrities, dancers and singer supporting the song with several dance videos, song covers and social media challenges. Even the like of popular Jamaican female artist Yanique Curvy Diva danced to the song which she shared on Instagram with Wizkid reposting the video after she posted it. The song had over 2 million views in less than a week and several streams on all the top music stores, topping charts in countries like Nigeria, Ghana, Ivory Coast and other West African countries, also in East Africa Kenya, Tanzania and Uganda. The song later went on to be named the biggest Afrobeats song in Nigeria for the year by several media houses in Nigeria, and is also referenced by some as one of most successful afrobeats songs of the past decade.

There were controversies surrounding the creation process of this song when the song producer Northboi came out in 2019 and said Wizkid has not paid him his royalties for the song and revealed the singer has tried to cheat him several times and nothing giving him proper recognition for the production for one of his biggest songs ever.

At the time of writing the song has over 200 million streams digitally on across all music platforms and still growing. With over 100 million streams for the music video and audio both combined on Youtube alone. The song according to Wizkid himself inspired more new songs which ended up being successful too.